Why to Use Python For Web Development?

Undoubtedly, Python has become one of the most dominant programming languages today. As per stats by major survey sites, Python has ranked among the top coding language for the past few years now. There are tons of reasons for choosing Python as the primary language if compared with others such as Java, C++, or PHP. Since we’re here to talk about web development, surprisingly even in web development, Python has reached its peak with tons of features, and improvements, and over the period it is becoming popular every day.

What’s the most crucial point from a developer’s point of view is to pick the right language that can deliver the desired results with ease, especially when we talk about web development, there are certain factors to consider that include management of database, security, and data retrieval and so on. Now, how these factors fit in with Python is still clueless for most programmers because they’ve been using Java, PHP, etc. for web development but today, even big tech giants like Netflix, Google, and NASA have been actively using Python for web development. So, in this article, we will see why Python can be considered for web development and became famous among the top programming language over these years.

In contrast, Multi-purpose can simply be referred to as a multi-functionality having capabilities to operate in multiple ways. Surprisingly a developer can do wonders and can easily develop software by implementing easy methods. Being an interpreted language (smoothness in dev. process), this platform is absolutely free and open for all, it also offers platform independency, meaning their (Python’s) code can run on any platform without making any changes (such as Linux, macOS, etc.)

Besides this, Python can also be used in various ways:

This makes Python one of the most demanding languages for all tiers of businesses (small to large) and that is what makes it one of the perfect choices for web development.

Establishing database connectivity is pretty simple with Python and accessing (including implementation) can easily be done on major databases such as Oracle, MySQL, PostgreSQL, etc and they can be called up by their respective APIs when required. Mention a demographic image below for best reference on how connectivity is being established. 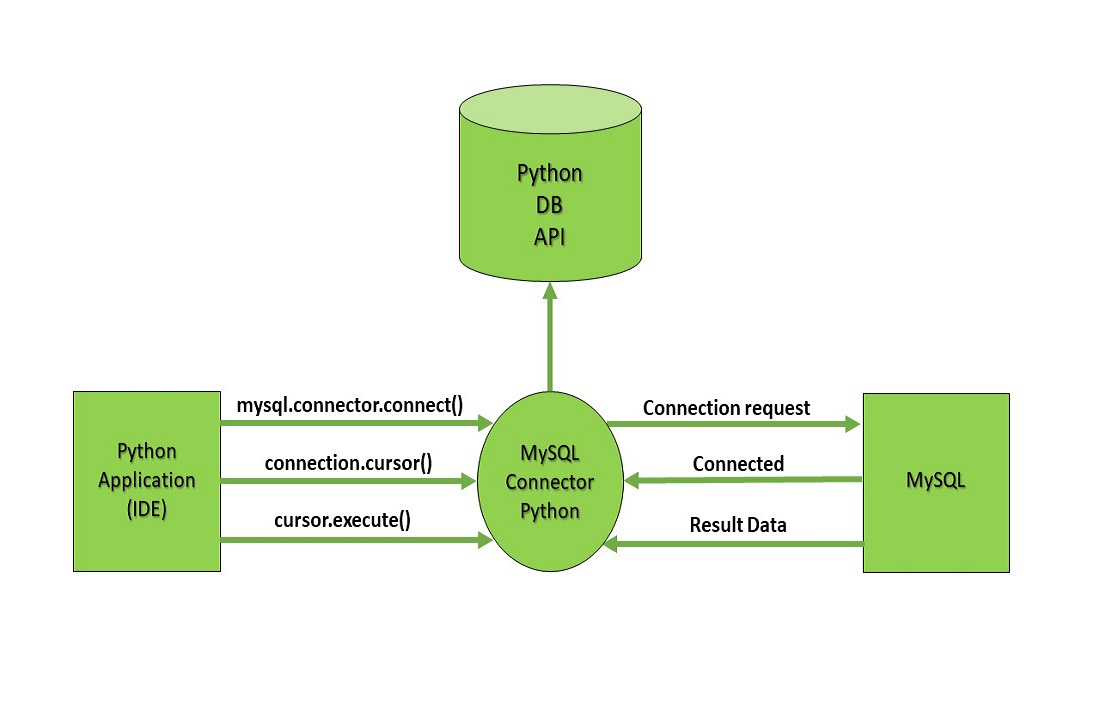 Some of the most common used DB connections are:

Steps involved in this process: DB connectivity in python consists of 5 major processes that include:

How to establish a connection – MySQL server?

As we’ve discussed the multi-tasking capability of Python programming language, application testing is one of the major advantages that developers get and eventually saves time and money. It enables ease in debugging, deployment, and building prototypes.

The reason is, that it offers ease in terms of syntax, and readability and is perfect for learning automation. It also offers an easy-to-employ UT framework by which you can even perform geolocation testing (for mobile devices).

There are 2 major testings that can be performed within python programming:

Unit testing: It’s a technique used by developers to perform testing of a particular segment (of course to check for any bugs) and it provides testing of any individual unit for spotting and fixing errors. Majorly used when a developer is writing a lengthy code, testing a section can save time and resources as well. This test is being performed in chunks to identify whether it’s working properly and changes can be done accordingly without spending much time. Below is the example of executing the unit test function:

Also, you can gather more information from the following article: Unit Testing in Python

This process completes the cycle of software development y putting the app in an environment where it can be pushed for LIVE. For Python, there are 5 major models that developers usually choose:

Being an easy and multi-purpose programming language, Python is way too easy for accessing and it guides developers to perform actions without much difficulty. A programmer can easily build a prototype to test out the codes and it reduces cost and workload.

There’s a list of some influential frameworks that help in building sites and can easily fit into your project. And that too by offering enhanced security for either simple or complex websites, Python frameworks won’t disappoint you for sure.

Frameworks? A tool built on top of any programming language to offer enhanced features when trying to build something useful. In Python, there are certain useful frameworks that help speed up the development process and enable developers to build advanced features. They (frameworks) come with bundled codes and modules so that they can be implemented multiple times.

Let’s take a look at some of the best and most popular frameworks that are used in Python programming:

As per the recent survey, over 10 million developers are helping in making it a strong base and actively offering their inputs whenever someone gets stuck. The number is high and is primarily for rectifying the errors that exist during designing the language. On average, hundreds of queries are being posted, viewed, and replied to by active developers throughout the world. Their community also helps in solving complex problems that you might not find anywhere on the internet and whenever you’re working on any project in any organization, there might be circumstances that can put you in trouble, so next time, don’t forget to visit its official forum for finding out the answer. If you’re at the beginner level, we suggest you go for Python Programming Foundation -Self Paced course and get certified in a structured way in no time.

While using Python, development and deployment are way too simple, whereas in microservice architectures, the apps are highly detached and they connect with each other system (via light agnostic mechanism).