What is black and white and read all over?

Noto emoji, a new black and white emoji font with less color, may gain us more in the long run

In 1999 — back when Snake 🐍 was the best thing about your phone 📱 — there were three phone carriers in Japan 🗾 . On these phones were tiny, beautiful pictures called emoji (meaning “picture” and “character” in Japanese 🥰). These 176 images were very simple — think 8-bit tech — and as a result were exquisitely abstract and tremendously useful when texting ✨ Twenty years later 👶🕛🕐🕑🕒🕓🕔🕕🕖🕗🕘🕙🕚🧓, emoji are a global phenomenon 🌎. Now, our phones have fancy retina screens and somewhere along the way an important part of what made emoji so handy was left by the wayside: their simplicity. That’s why we’ve created a new emoji font: a monochrome Noto Emoji (a black and white companion to Noto Emoji Color).

Noto Emoji works like any other font you might use: You can change any character’s color, size and weight. Download it and give it a whirl. 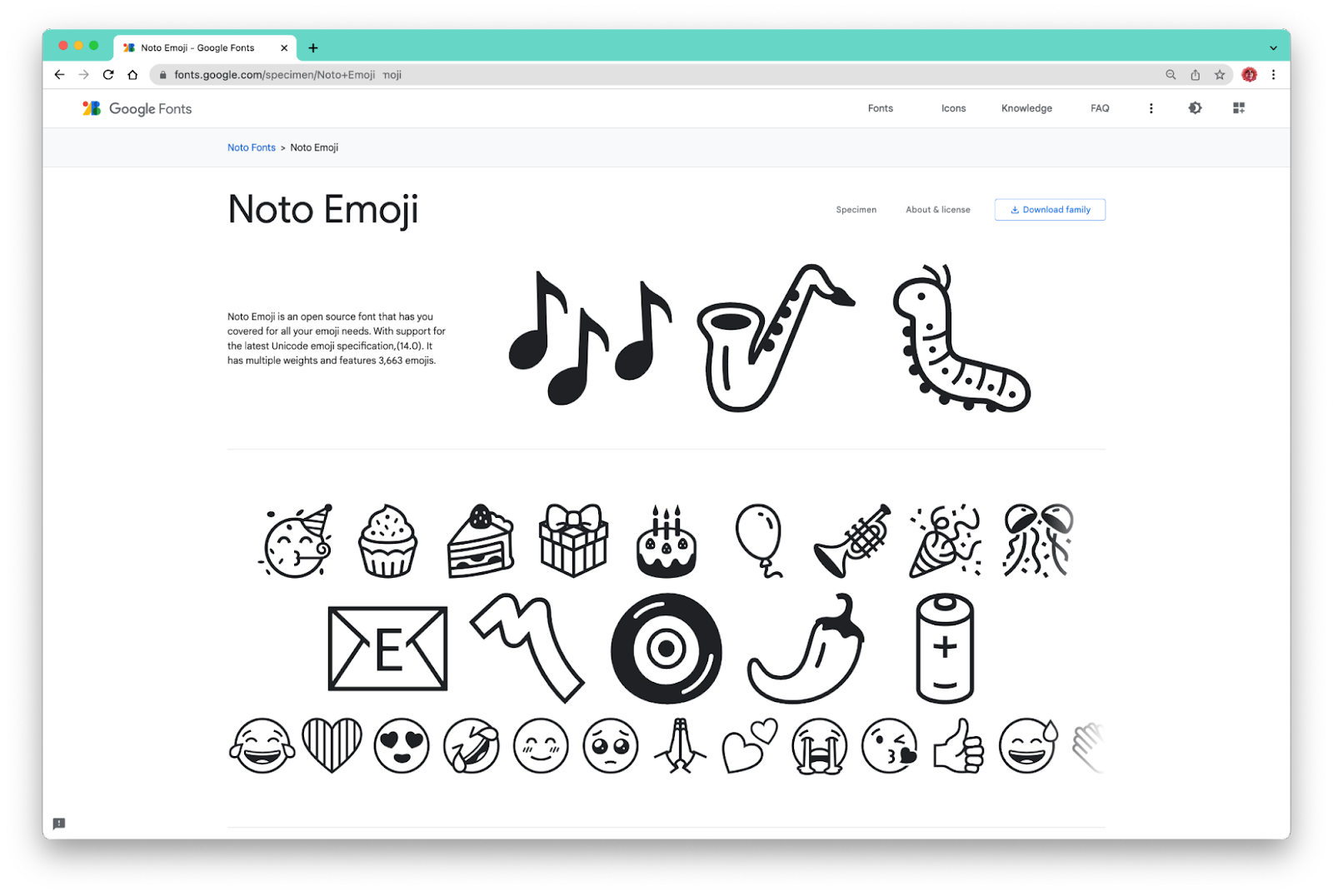 Over time, emoji have become more detailed. Instead of representing broad concepts there has been a trend to design emoji to be hyper realistic. This wouldn’t be a problem except skeuomorphism’s specificity has resulted in the exclusion of other similar concepts in your keyboard. Today we have “💃” … but what about other types of dance? Hula dancing? Belly dancing? Salsa dancing? Boogie woogie? By removing as much detail as possible, emoji could be more flexible, representing the idea of something instead of specifically what is in front of you (that … is what your camera is for 😂).

We also want to make sure emoji keep up with platform technology. We’ve got dark mode … we’ve got light mode … and now you can change the color of your emoji font so it can operate with the same dynamism as your operating system. Noto Emoji is also a variable font — opt for a “light” grade if it appears small 💪 or “bold” if you want them to have some weight. 💪 .

To design something simple seems like it would be … well, simple … but it’s deceptively complex 😅

At first the approach seemed obvious — simply redraw the Noto Emoji Color designs in black and white. They are iconic, they will be legible. Done deal. Easy peasy, lemon squeezy. Not so fast. The removal of color is no trivial task. Take for example: Flags.

You can’t simply convert flags into black and white. You wouldn’t be able to tell the difference between Finland and Sweden. You could redraw the flags but that puts them at risk of being incorrect. Instead, we leveraged the ISO’s country codes. These sequences of letters are unique and represent each country. As a result, black and white flags have a much more contemporary aesthetic — kind of like bumper stickers 😜.

Let’s also take a look at the process involved to redesign the people emoji. For some characters, color is baked into the concept (like skin tone or hair color). It simply didn’t look right to replace color with hash marks or polka dots. And that my dear is how the blobs came back. Say hello (again) to our little friends.

Likable. Nostalgic. Relatable without maintaining a distinction between genders. Google’s blob emoji were really something special. Cute, squishy, and remarkably friendly. We were able to bring back a little bit of what made them special while simultaneously discarding the parts that weren’t working. Most notably, the blobs’ facial expressions were wildly inconsistent but that was very easily fixed in black and white mode. It’s important emoji work cross-platform. The real world is not black and white but in emoji land we can finally have our favorite little dancer back 💃.

So here we are today, dancing into the future with our favorite new emoji font. We can’t wait to see how you use it. Visit Google Fonts to download or embed onto your website. Happy emoji-ing! 🐒🐒🎉🐬