Top Programming Languages To Choose in 2023

To ensure that your digital solution won’t become obsolete any time soon, you should carefully consider the tech stack for your software development project.

In this article, we’ll have a look at the most popular coding languages in 2023 and outline their benefits for building effective software solutions.

The Most Learned Languages

When it comes to the most learned programming languages, it usually involves the ones that have established themselves as a gold standard for a particular software development field. This standard guarantees that a software developer will be able to build a stable application, a software layer, or a service and effectively maintain it over time.

Let’s have a look at different software development areas and the most popular programming languages used in them.

A wildly popular software development field that involves the creation of web applications that run in a browser. Today, a great number of businesses prefer building their digital solutions using web technologies – from e-commerce web apps and streaming services to social media apps, and more.

Over 76% of smartphone users utilize their devices for messaging, listening to music – 61%, accessing their online bank accounts – 61%, watching videos – 61%, searching for products – 57%, and much more. This makes mobile development a prospective direction for those businesses that want to provide their services “on the go”.

Data science allows processing and analyzing large volumes of data with the help of Machine Learning and Artificial Intelligence. This data can be used for effective customer engagement based on the analysis of the data coming from different sources.

Application Programming Interfaces (APIs) help developers to create complex and performant applications in Banking and finance sector, energy and utilities, logistics, healthcare and other industries. This way, software developers can significantly speed up the development process, ensuring fewer programming errors in the codebase.

To build effective APIs, software developers use the following languages: JavaScript, Python, C, C++, Rust, and many others, depending on the requirements of a specific platform, app, or service.

The rise of the Internet of Things has made embedded systems development especially popular. As embedded systems represent a specific combination of computer hardware and software, some specific programming languages should be used to create them.

Cloud computing services are on the rise today as more and more companies prefer to migrate their software from local servers to the cloud. Software developers who opt for cloud computing software development create solutions that are deployed to cloud storages such as Amazon AWS, Google Cloud, Azure, and many others.

The Most Commonly Used Languages

If you refer to the StackOverflow last three reports, released from 2020 to 2022, it’ll be easy to trace the trend of the most utilized programming languages. Unsurprisingly, this data will strongly correlate with the most learned programming languages. That’s because, before learning any new technology in any software development field, software developers first aim to learn the basics.

That’s why JavaScript has been keeping its leading position for 10 years in a row as the most popular and most used programming language.

Here are some more stats on different programming languages by StackOverflow. 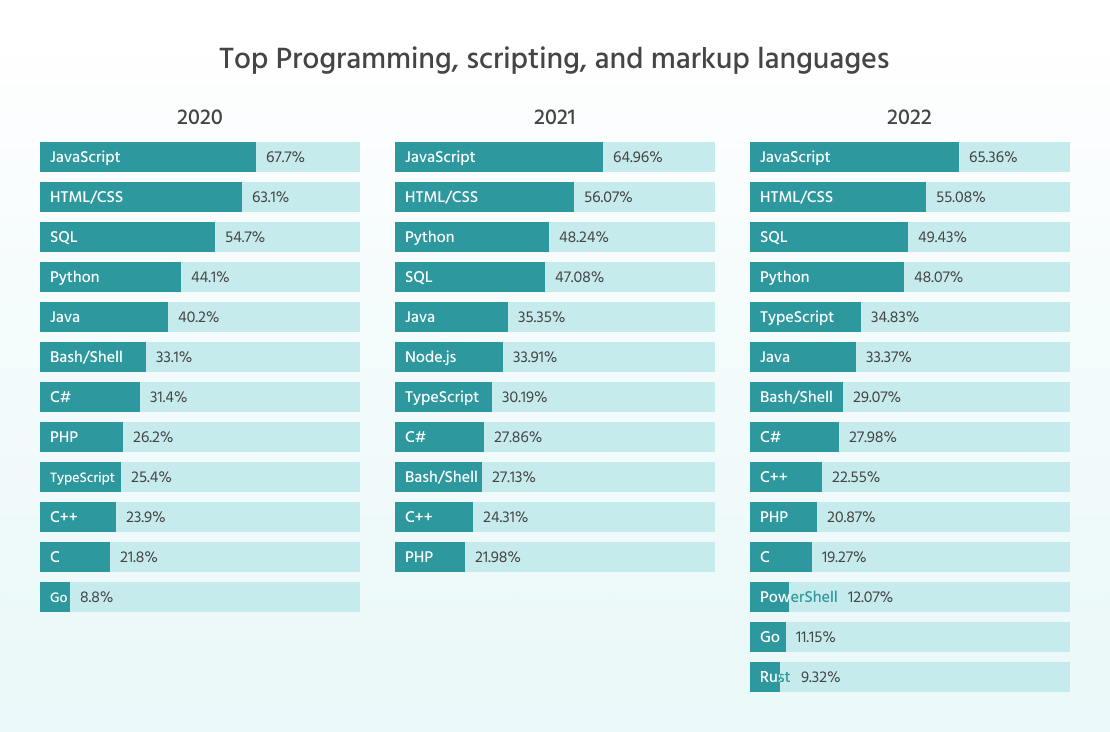 Python is a seasoned programming language that has a large community of software developers. The main reasons why Python remains a popular option since its release in the 1980s are its simplicity and great applicability.

It’s one of the programming languages most commonly chosen by beginners due to its English-like syntax and simple readability. Meanwhile, it’s a powerful solution used for building diverse software solutions, including Machine Learning applications, video games, scientific and computational apps, web apps, and more.

Python is an open-source language and it supports an extensive set of libraries, frameworks, IDEs, and tools such as Django, Flask, CherryPy, TensorFlow, Pandas, PyTorch, and many others. Software developers effectively implement all these instruments for building complex code apps, data science, data analytics and modeling, web applications and web API development, and even the creation of 2D imaging and 3D animation.

Java is another time-tested programming language used for the development of many platforms and applications. The main unbeatable Java advantage is the ability to run on any platform due to its reliance on JVM (Java Virtual Machine) installed on any modern machine. As a result, Java works across many platforms from data centers to smartphones.

The most popular frameworks in Java are Spring, Spring Boot, Struts, and Hibernate which are applied by such popular companies as Netflix, Yatra, Amazon, eBay, Accenture, NexGen Technologies, and many others. Apart from that, Java provides many powerful instruments, APIs, and libraries for simple and fast software development.

Although many developers prefer other programming languages to C, it’s, as well as C++, still popular and widely used for software development. That’s because both of the languages are highly-performant. Therefore, they’re used for building apps where performance is essential, e.g. client/server software, heavy commercial solutions such as Adobe, Google apps, MySQL Server, Microsoft, and Apple operating systems, and more.

JavaScript is one of the major technologies in front-end development used for the creation of dynamic and interactive web content.

Although JavaScript was long used for building only a front-end layer in apps, today it’s also effectively implemented for server-side web application development. This has become possible due to one of its many frameworks – Node.js. Knowing one or two front-end JavaScript frameworks such as React.js or Angular and learning Node.js, JavaScript developers can quickly achieve a new level in software development, becoming full-stack developers.

Microsoft has developed C# language as an alternative to C and C++. It’s an object-oriented general-purpose language that mainly runs on the .NET platform. C# has a broad application, it’s used for building Windows, Android, iOS, and cross-platform applications. Also, C# is widely utilized in Unity for creating scripts in-game environments, therefore, it can be effectively implemented for building Virtual Reality applications.

Many programmers choose C# as a starting point to dive deeper into the C family in the future. Nevertheless, C# itself is a rather robust solution often compared to Java. The main advantages of C# are that it’s a purely object-oriented language that allows the development of modular maintainable applications, an efficient garbage collection system, strong memory backup, logical and concise, and strong Microsoft support – meaning no shortage of tools and libraries.

Since its development in 2007, Go (also known as Golang) has only been growing in popularity. It’s expected that in 2023, software developers will continue to widely implement Go in system programming, e.g. API, web server development, machine learning packages, and so on. Go has many similarities with C and C++, although it has a much simpler syntax and, therefore, it’s easier to learn.

Developed and supported by Google, Go offers software developers a range of advantages, including powerful performance, the possibility to use it for multi-core processors, fast garbage collection, easy to learn and maintain, effective implementation for complex and large projects, and much more. Such complex services as Google Earth, Uber, Twitch, SoundCloud, Dropbox, and YouTube were written with Go.

HyperText Markup Language (HTML) is a core technology for building web pages and applications. It’s been used for web development since 1993 and in 1999 already became an official standard for web page development.

HTML helps to structure web pages and make them comply with the standards of web page viewing throughout the Internet. We believe that HTML won’t disappear any time soon and it’ll continue to be a must-to-learn technology for front-end development specialists in 2023.

Swift is a powerful open-source programming language primarily used for Apple product development, including iOS, iPadOS, watchOS, and tvOS. Swift is easy to learn and it can smoothly co-exist with Objective-C – another programming language for building OS X and iOS software.

OS developers give preference to Swift for many reasons. It’s a safe and fast programming language with clear, concise syntax. Moreover, it can be simply used with IBM Swift Sandbox and IBM Bluemix. Due to all these features, we believe that Swift will continue to be at the forefront of Apple’s software development in 2023.

PHP has a large community and an extensive base of educational materials. However, these are not the only reasons why software developers opt for this programming language. PHP provides fast loading of websites and has various database connectivity options with inexpensive website hosting options. It supports such databases as MySQL, mSQL, MS-SQL, SQLite, PostgreSQL, ElasticSearch, Redis, MongoDB, and many others.

Moreover, PHP has great combinability with HTML and is quite flexible – it can be used for various operating systems, including Windows, Linux, and macOS.

The main Kotlin idea is to be better than Java, and many software developers follow this idea, opting for this programming language. Moreover, at Google I/O 2017 technical conference, Google announced that Kotlin will be the first programming language for Android development and since then the integration has only become stronger. Though not only Android apps are built with Kotlin, many more companies use it for digital solutions, including Coursera, Pinterest, PostMates, and others.

Selecting the right programming language for a software development project is never easy. Companies have to consider their product and business requirements, budget, and timeframe, and not only that. It’s also important to realize which programming languages can be used to ensure that the resulting solution will be stable, secure, and easy to maintain through the years.