Read a Particular Page from a PDF File in Python

Document processing is one of the most common use cases for the Python programming language. This allows the language to process many files, such as database files, multimedia files and encrypted files, to name a few. This article will teach you how to read a particular page from a PDF (Portable Document Format) file in Python.

Note: This PyMuPDF library is imported by using the following command.

Reading a page from a pdf file requires loading it and then displaying the contents of only one of its pages. This essentially makes that one-page equivalent of an image. Therefore, the page from the pdf file would be read and displayed as an image.

The following example demonstrates the above process: 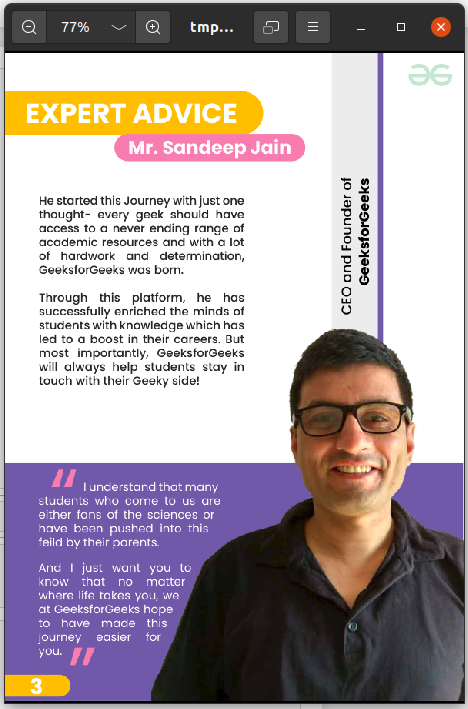 Method 2: Reading a particular page from a PDF using PyPDF2

For the second example, the PyPDF2 library would be used. Which could be installed by running the following command:

The same objective could be achieved by using the PyPDF2 library. The library allows processing for pdf files and allows various operations such as reading, writing or creating a pdf file. For the task at hand, the use of the extract text function would be made to obtain the text from the PDF file and display it. The code for this is as follows:

Firstly the path to the input pdf and the page number are defined in separate variables. Then the pdf file is opened, and its file object is stored in a variable. Then this variable is passed as an argument to the PdfFileReader function, which creates a pdf reader object out of a file object. Then the data stored within the page number defined in the page variable is obtained and stored in a variable. Then the text is extracted from that PDF page, and the file object is closed. In the end, the extracted text data is displayed.