Part 1 connected to this article focuses on users, groups, and policy automation with Terraform. If you haven’t read it yet, it’s called Managing AWS IAM With Terraform: Part 1.

Following the first part, in this tutorial, we will cover:

Side note: This article assumes you already understand what Terraform is and know the basics of it. If not, start with a Terraform official tutorial.

In a medium to large-sized team or company, using a multi-account strategy is common to ensure maximum resource separation and precise permission management.

For example, it’s common to see the following three accounts in an organization:

Creating a user in each account for each team member can be tedious. Yes, we can use Terraform to automate the process, but there are still two major drawbacks:

We will use two AWS accounts in this tutorial:

Note: The Terraform information in the following section (1.3) is executed in this account

You can get all the code in this tutorial from this repo.

The code snippet above means:

Put your central account ID in the terraform.tfvars file before continuing.

In the output, we will get an AWS role ARN like the following:

Note: The assumed role can also work in the AWS Console

The role ARN is the Terraform output from the previous section.

Note: Remember to clean your bash history after the session

At this point, any following commands will run under the permissions of the role identified by those credentials. We can run aws sts get-caller-identity to check that we are already assuming a role under the dev account and not our original user in the central account.

The previous testing process is a bit tedious because we need to export a lot of sensitive stuff, which is not recommended.

After we get it installed and configured, we can simply run one command:

This does exactly what all those commands in the previous section did.

If you are using AWS EC2 instances, chances are you have deployed some apps on those instances, and those apps might need access to other AWS services.

For example, you wrote a small application that writes some data to an AWS S3 bucket. You deploy your app in an EC2 instance, and you must configure it correctly so your app has the right permission to write to AWS S3.

It is not recommended to use an IAM user for machine-to-machine connection, for two reasons:

2.2 What Are Instance Profiles?

TL;DR: It’s safer to use IAM roles to manage permissions and attach them to instances. Instance profiles and roles, in general, provide temporary (or dynamic) credentials on request. If those credentials leak, the damage is contained to their lifespan.

The code snippet above does the following:

Even if we already have Terraform, we still have to create some temporary users for just-in-time access.

For example, one data engineer needs temporary access to an S3 bucket to verify some data. Maybe he only needs this permission for a one-time job, then he would not use AWS for a long time, so it doesn’t make sense to create a permanent account for him to have indefinite access.

For another, maybe your developer needs to get access to a production EC2 instance for debugging, which might also be a one-time job. If you are using Terraform to manage permissions, you probably already use groups for permissions, but it doesn’t make sense to grant the whole group temporary prod access.

You get the idea. While you can give someone permanent access, most of the time, you don’t have to, and you shouldn’t, according to our zero-trust and least-privilege access principles.

Even if you used a specific set of Terraform rules to create temporary roles for these temporary accesses, you’d still have to apply/destroy them manually, which is not only operational overhead but also increases potential risks: What if you forgot to destroy permissions and indefinite access is maintained?

In this section, we will use Vault to achieve true just-in-time access management for AWS IAM.

HashiCorp Vault can secure, store, and tightly control access to tokens, passwords, certificates, and encryption keys for protecting secrets and other sensitive data using a UI, CLI, or HTTP API.

In this part, we will install Vault in a local macOS environment.

Then start the server by running:

Under the “Secrets Engines” tab, click the “enable new engine” button and choose AWS. Click next, then enable the engine:

Then we go to the configuration tab of the AWS engine, and click “configure:”

After, we put an AWS key and secret (who has IAM access) to the “dynamic IAM root credentials” tab, and in the “leases” tab, let’s choose a reasonable time, say, 30 minutes:

Then we can go to the “secrets” tab, choose “AWS,” and click “Create role:”

On the create role page, we put the following info:

For testing purposes, we use the role ARN arn:aws:iam::aws:policy/AmazonS3FullAccess , which will give this role full S3 access. But don’t worry, this role won’t be created right away and it’s managed by Vault.

If we go to the secrets tab in the AWS engine for the test role we created, we can create a new credential: 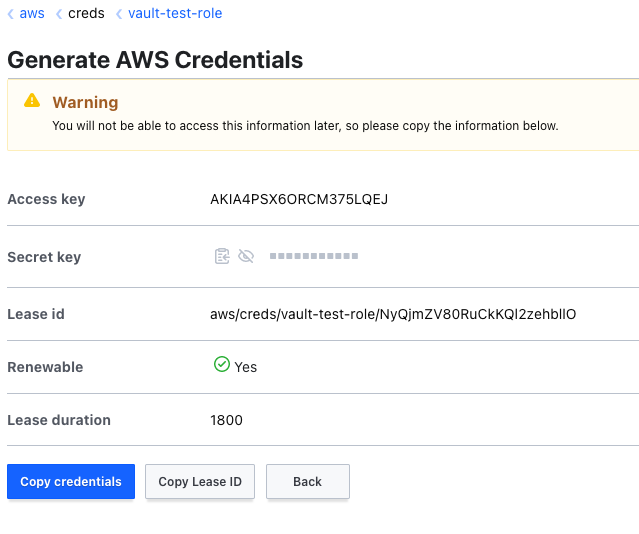 Now if we use this user’s key and secret, we have full S3 access. And, it’s only valid for 30 minutes, after which, the user will be deleted.

If we login to the AWS console and go to IAM, we can see this user:

And it has the right permission:

In summary, Vault can manage predefined IAM roles according to predefined policies automatically, and ensure the duration of the access won’t exceed the predefined lease time.

In this second (and last) part of the IAM tutorial, we have learned:

For the last one, there is more to learn if you want to make it production-ready, for example, you could explore DynamoDB Storage Backend and Auto-unseal with AWS KMS.

IAM has grown more complicated over the years. I hope this mini-series helps automate your daily routine and reduce your operational overhead.