This is the second part of the How to Read Graph Database Benchmark series and is dedicated to query results validation of three types of operations:

Let’s start with K-hop queries. First, let’s be clear about the definition of K-hop; there have been second types of K-hop:

No matter which type of K-hop you are looking at, two essential points affect the correctness of the query:

Some vendors use DFS to find the shortest paths; this approach has two fatal problems:

Let’s validate the 1-Hop result of vertex ID=27960125 in Twitter-2010; first, we start from the source file, which shows eight edges (rows of connecting neighbors), but what exactly is its 1-hop?

The correct answer is seven! Because node 27960125 has a neighbor ID=27498091 which appears twice because there are two edges between these two vertices. If we deduplicate, we have seven.

To expand here on K-hop queries, it is possible to launch K-hop per edge direction; the screenshots below show four ways for running K-hop: regular bidirectional K-hop, outbound K-hop, inbound K-hop, and K-hop with all neighbors. These combined queries can help validate any K-hop query. 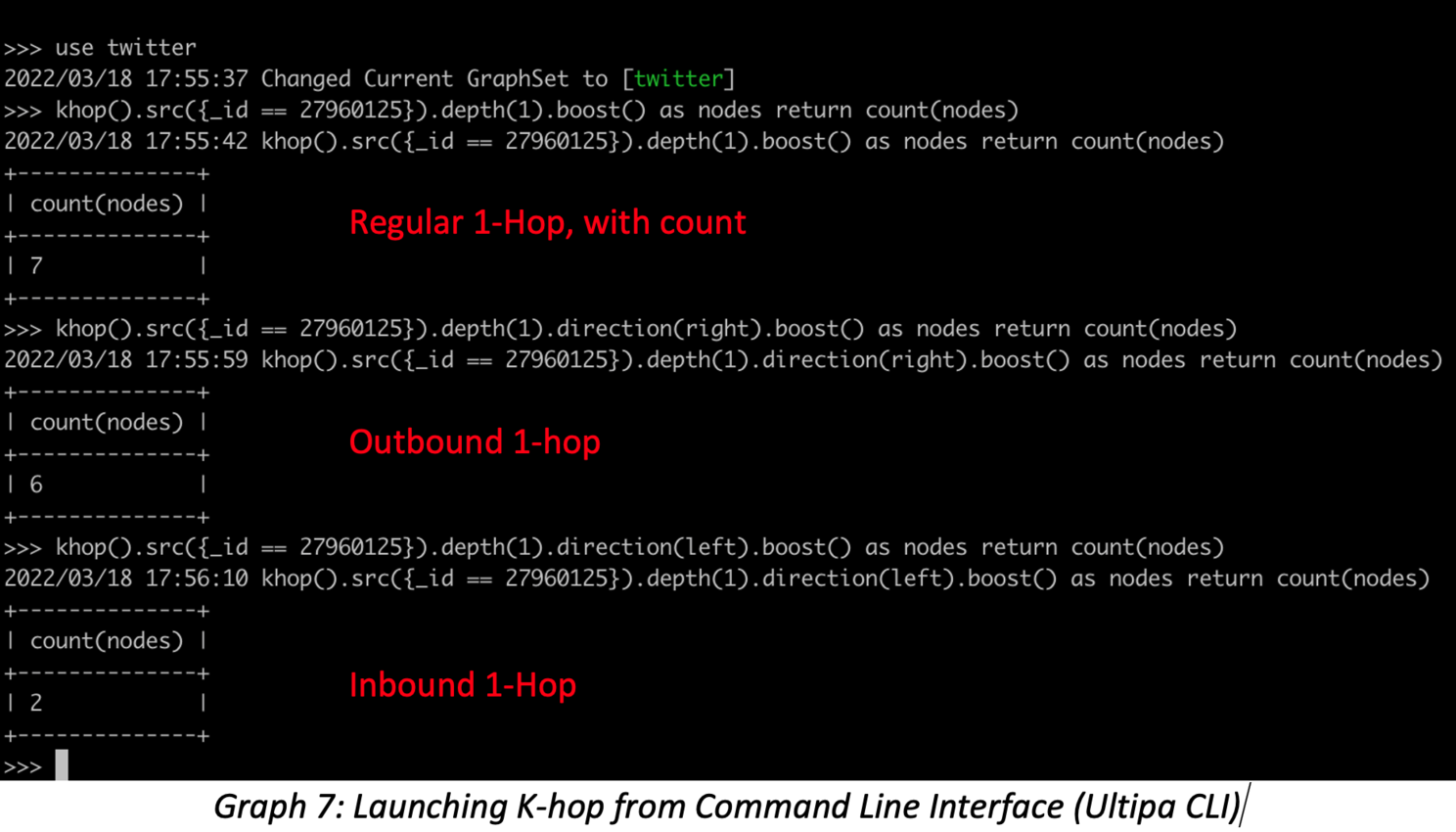 There are three possible causes for the Tigergraph K-hop problem:

Data modeling mistake is fatal; business logic will NOT be correctly reflected in the underpinning data models. Taking anti-fraud, AML, or BI scenarios as an example, account A receives a transaction from account B; however, the system only stores an edge pointing from A to B (A →B) but not the inverted edge from B to A (B←A), this would make it impossible to trace the transaction starting from account B. This clearly is unacceptable.

If we continue to track vertex ID=27960125’s 2-hop result, the Tigergraph’s mistakes become more dramatic yet more difficult to validate. Note that Tigergraph returns 1128 neighbors, but there are duplicated neighbors, and the result is only based on outbound edges. The correct number of 2-Hop neighbors should be 533108; the difference here is 473 times 47,300%! Tigergraph’s query results carry three mistakes simultaneously: a data-modeling mistake, a query method mistake, and a deduplication mistake.

Unfortunately, Tigergraph’s problem isn’t an exception; we are seeing similar problems with Neo4j, ArangoDB, and other graph systems. For instance, Neo4j, by default, does NOT deduplicate K-hop results; if you force it to dedup, it will run exponentially slower. And, ArangoDB has a form of shortest-path query that returns only one path, which is fast but ridiculously wrong when there are many paths in the results pool.

GUI tools can help us visually and intuitively query and interact with the dataset and results. The screenshot below shows the 1-hop query results for a vertex with 13 neighbors.

How to validate the results above? A simple way is to expand on the vertex in a BFS fashion and expand for only one layer (hop). The diagram below shows when expanding on the subject vertex using the spread() function, it has 19 connecting edges, but the unique neighbors are only 13 after six edges are de-duplicated.

We now know shortest-path is a special form of K-hop query; it’s different by two characteristics:

The two diagrams above show that there are multiple shortest paths between ID 12 and 13 in; however, if you search by a certain direction, you may get different answers as search filtering logic kicks in. For simple cases like this, you may grep the source file to find that there are two bidirectional edges between vertex ID 12 and 13, and if you do it recursively, you can validate more sophisticated queries. Note the keyword “recursively” I just used, it’s exactly why GQL/Graph-DBMS will be mainstream, and SQL/RDBMS will fade away because SQL’s weakest link is its inability to handle recursive queries, and GQL/Graph is automated on this.

If the Jaccard Similarity algorithm is integrated, launching it directly will churn out the correct answer of 0.4. If you desire to write several lines of GQL to implement it in an organic and white-box way, you can do this:

In Twitter-2010, computing Jaccard Similarity of any pair of vertices is to find each vertex’s 1-hop neighbors, taking ID=12 and ID=13 as an example; they both are hotspot supernodes having over one million neighbors, it would be impractical to validate the algorithm results manually. However, as long as you understand the logic under the hood of the algorithm, there are ways to divide and conquer it. The steps below show two ways to validate the algorithm:

2. Validation Method 1: Using multiple GQLs to implement the Jaccard Similarity algorithm, the coding logic is the same as illustrated in Graph 17:

4. Validation Method 2: Finding all distinct paths that are exactly 2-hop deep between ID 12 & 13, the number of paths is equal to the number of common neighbors of the two IDs:

6. As you can see, the results from steps two and five are exact. We know the answer is right.

In this series of articles (two), we traveled extra distance to give readers a comprehensive overview of how to read and digest a graph database system’s benchmark report and methods to validate the results within. It’s important to ensure the results are complete and correct; after all, we are talking about data intelligence and infrastructure revolution; it would be pointless if a disruptive technology like graph DBMS can’t ensure the correctness of its data modeling or query results.