How to Create a Python curses-enabled Application

In the first part of this programming tutorial series, we learned how to install and setup the Python curses module, which is related to the C ncurses library. Today, we will continue that discussion as we create our first “Hello, World” example using the curses library.

If you missed the first part of this series, you can read it here: Python curses: Drawing with Text.

With all of the formalities concluded, it is now time to create a simple program that will demonstrate basic ncurses functionality via a Python curses-enabled program. The code below will write a customary “Hello, world!” message to the terminal:

The first line in main, stdscr = curses.initscr(), shows that the curses treats the screen as a curses window object that happens to cover the entire screen. All of the other functions that write text to the screen are members of the curses object. However, stdscr = curses.initscr() goes further by initializing the ncurses module so that it can do its work on the terminal.

Text Positioning with curses in Python

The code above makes use of ncurses’ positioning grid to place the text on the screen. ncurses uses a zero-indexed grid system, represented by X and Y values, to position elements on the screen: The second position, which is calculated based on the width of a string, is an approximation of the center of the terminal on a fixed line. Note that, unlike a truly graphical program, the position is always going to be either 1 over, 1 less, or exactly on the width of the terminal. This variance is because the terminal width must be an integer, as cursor positions cannot be fractional. The code even casts the result of the calculation to an integer for this very reason.

The third position right-justifies the text literal with the instructions to press a (any) key to quit. As with the second position, the starting X coordinate is calculated relative to the curses.COLS, except that there is no division by 2.

Note: the exception messages returned by the Python curses module due to incorrect sizing of strings, windows, or other objects often make no mention of a size problem. One way to mitigate this is to check all of these calculations before passing any values into any curses object, and, if the math does not allow for a fit, then prematurely raise an exception with a suitable error message.

How to Draw or Place Text with Python curses

The stdscr.getch() code works in tandem with the curses.cbreak(), curses.curs_set(False), and curses.noecho() calls above it. Without curses.cbreak(), it would be necessary to press Enter after pressing any other key. For this example, that would not be the desired operation. Without curses.noecho(), the value of whatever key was pressed would be echoed back to the terminal. That echoing would have the potential to undesirably change the text on the screen. Lastly, without curses.curs_set(False), the blinking cursor would still be displayed on the screen, and this can potentially confuse users in applications with more complex interfaces.

As 99% of the “selling point” of ncurses is the ability to display windows in a text-based terminal interface it begs the point of actually creating some. And, why not make this a little more interesting by adding some colors to the output too?

The code below makes further use of the Python curses.window object, along with the colors defined in the curses module to create three randomly generated windows on the terminal. Now, a more seasoned developer might call out the “non-usage” of object-oriented code here, as this code would be a good use case for that, but for the purposes of an introductory demonstration, it is easier to focus more on the curses objects themselves, as opposed to how Python calls them, even if it makes for longer code:

The color constants, along with the formatting constants for the bolded text, are all defined at curses — Terminal handling for character-cell displays — Python 3.10.5 documentation.

There are 4 possible types of outputs to this program, as indicated by the layouts list at the top of the code:

Each window in the output above is represented by a distinct instantiation of the curses window object. The window object is returned by each call to curses.newwin(…) function. Note that, while each of the three windows above is instantiated via the curses.newwin(…) function, this function by itself does not initialize the ncurses module (nor do they de-initialize the same for return to the prompt). That still has to be done with curses.initscr(), even though the stdscr window object returned by this call is not going to be used in this code.

The curses.newwin(…) function has two overloads, the second of which is being used as it allows for the placement of the top-left corner anywhere on the screen, in addition to specifying the size of the window:

All four parameters are non-negative integers.

The first two values number-of-lines and number-of-columns are calculated as “random” integers that range in between ⅓ and ⅔ the height and width of the terminal window, respectively.

In this particular example, regardless of what the value of one of the randomly chosen layouts is, the first window is always the one that occupies the top-left corner of the terminal. The other two windows’ sizes and positions are calculated relative to the first window.

Any text that is placed within a window created using the curses.newwin(…) function must fully fit within the window. Any text that ends outside of the bounds of the window will cause an exception to be raised. The code above creates a caption that is placed in whatever window ends up occupying the bottom-left corner of the screen. Depending on what width is calculated for the size of this window, it is possible that the length of the caption may exceed the width of the window. If this is not accounted for, an exception will be raised.

In the above code example, it can be seen that the caption is not on the bottom-most line. This is because this particular implementation of curses will wrap the text to the next line should it overshoot the edge of the window, as shown below: 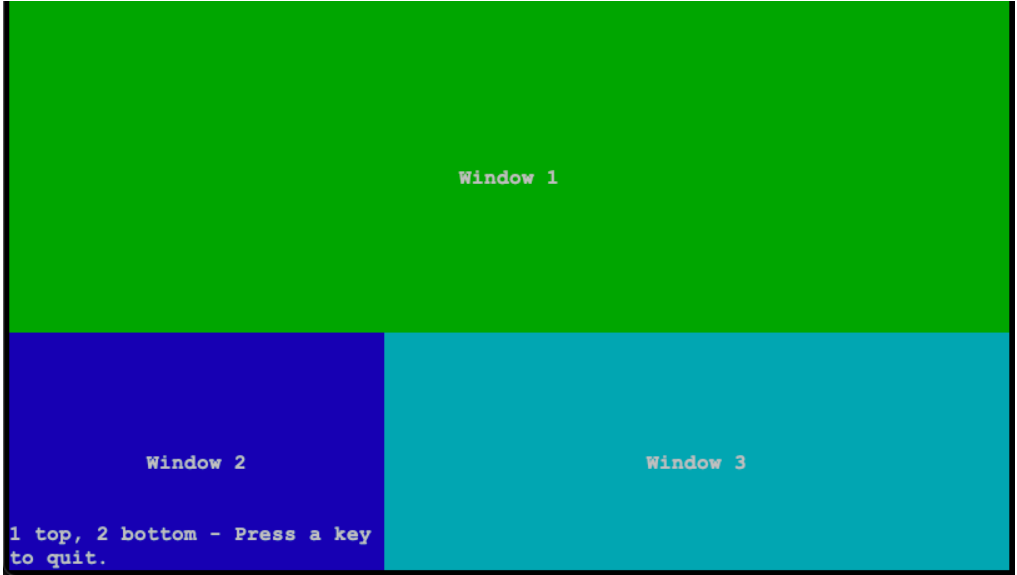 For this particular example, the terminal window was shrunk down significantly.

However, if there is no extra line to which the remainder of the text can be wrapped, an exception will be raised. Note: this line-wrapping behavior may not be consistent across all implementations of ncurses. In a production environment, extra code should be used to split the line into separate calls to window.addstr(…).

It may be noted that the examples previous to this listing presumed that the foreground text color was white and the background color was black. Depending on the terminal, and how meticulous a programmer may be, this may not be a wise presumption.

That is it for part two of this three-part programming tutorial series discussing how to work with the Python curses library to draw text in Linux. We will wrap up the final part in this series in our final piece. Check back here for the link once it is published!