Here Is How To Develop UIs Faster in ReactJS

It’s 2022, and React has a huge ecosystem to help developers bring complex UIs to life faster. Furthermore, with the extensive support of ReactJS libraries, there is hardly any case when a developer has to build a component from scratch.

However, not every ReactJS UI developer is aware of the best practices to build UIs faster in ReactJS. Therefore, I’ll be discussing the top five approaches (which I personally use) for building UIs quicker in a ReactJS project. So without further ado, let’s get started:

Here is how you can develop UIs faster in ReactJS: 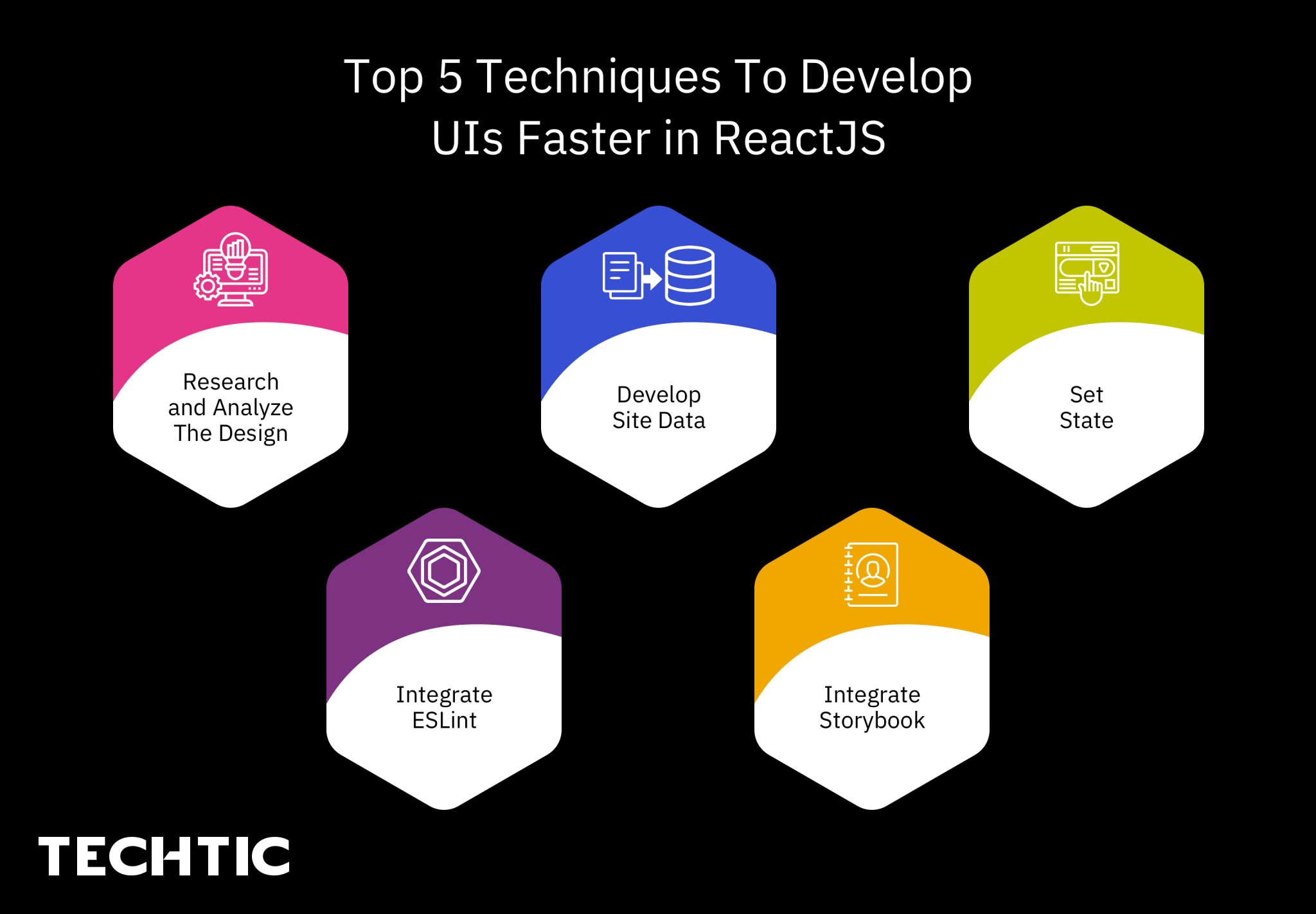 Research and Analyze the Design

To create the app’s UI using this strategy, you must examine the design and consider numerous patterns. Typically, mobile app developers spend at least 30 minutes evaluating and considering various tactics and patterns that might be used. They evaluate the design based on three criteria mentioned below:

Among all other strategies, this is the only one that will need a significant amount of our time. However, there is a reason behind this. It establishes the app’s roadmap and aids in the organization of our code.

What exactly do we mean by “wrapper” in this context? The wrapper is something that uses children as props. For example, assume you have a modal in three places in our app, with the same title, close icon, margin, and padding. You’ll create a ModalWrapper component for it. Similarly, we may create a card wrapper.

My next step is to make a list of things I can reuse in my application. For instance, buttons, input with labels, errors, and so forth. The major goal of documenting all reusable components is to maintain consistency and save time by avoiding writing the same line of code over and again. Props are used to alter reusable components. (Wrappers are likewise reusable components but require children, hence termed differently.)

We frequently run into a list of data while designing UIs since we don’t have APIs available; therefore, to make the process smooth and fast, I construct the dummy data and map it as needed. In addition, place it in a new folder called site-data.

We will destroy directories inside site data while connecting APIs. However, how you manage the site data is entirely up to you! To create the site data folder, you must use the snippet. For example, data is frequently encountered while building UIs, generating an object, and exporting it.

This approach assists you in keeping your components clean and having a lite version of CMS (if you like) for your app that may be used.

So, if you come across an interactive aspect of an app design, especially when employing forms, checkboxes, dropdowns, and so on. Always attempt to build up a state to receive changing data from users.

In the case of forms, I utilize console.log to record all form data entered via the submit button. When I needed to integrate APIs, it was quite useful and quick.

ESLint assists us in making our code more uniform. They forbid us from having unnecessary imports or variables and require us to adhere to uniformity across the project. For Javascript, we must utilize single quotes throughout the application and double quotes for attributes such as className and props, among others.

The Airbnb ESlint coding standard is often used by developers to decrease the number of mistakes on the spot while saving a significant amount of time.

Storybooks are fantastic for developing themes. It allows us to develop and test our component in isolation by modifying its properties and responsiveness. It may also be used for other reasons, such as keeping a component library, a set of identically created components, distributing it throughout the team for feedback, and so on.

It depends entirely on the needs and type of project we are working on. Using storybooks for small apps or landing pages with a couple of screens is not beneficial. 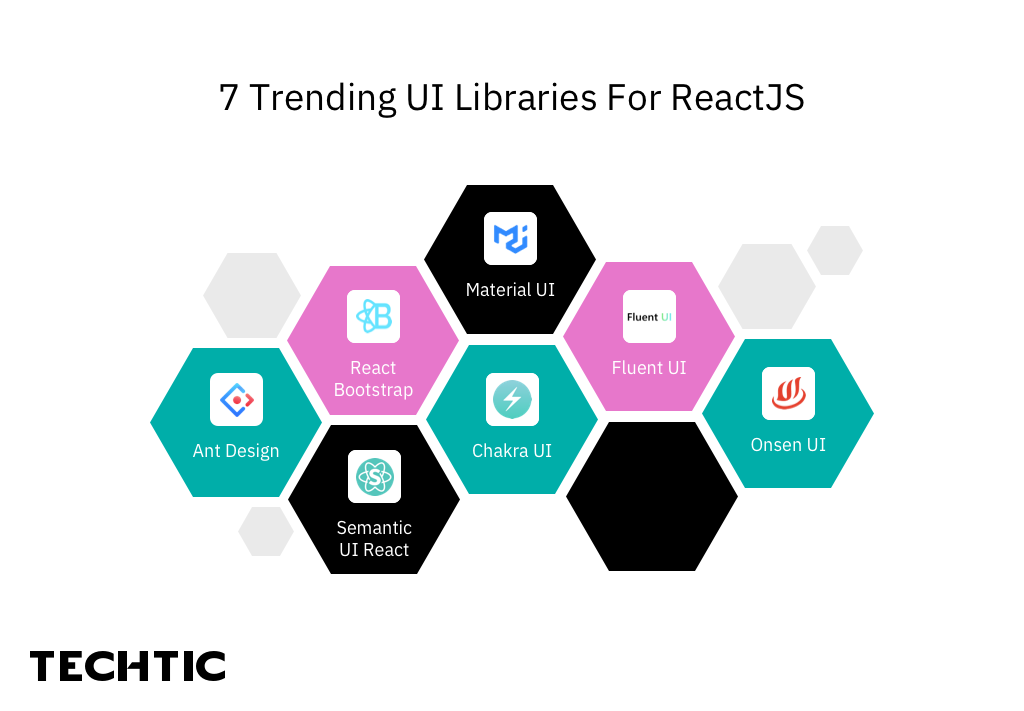 Ant Design is a UI design language and React UI framework for enterprises. According to GitHub Stars, it is the most popular React UI library. It features around 100 components, ranging from typography to tables. The Ant Design document is quite tidy and has several examples.

Ant Design saves more than just development time. It also saves designers time by including Sketch and Figma files for all components. The Ant Design component supports both JSX and TypeScript. The ant theme may also be easily customized. Ant Components saves ReactJs developers a lot of time when it comes to managing forms and validation because it offers prebuilt form components. Hooks are also supported by Ant Design.

Bootstrap JavaScript is replaced with React-Bootstrap. Each component was created from the ground up as a pure React component, with no unnecessary dependencies like jQuery.

React-Bootstrap has evolved and expanded, with React as one of the earliest libraries, making it a great choice for your UI basis.

With compatibility at the forefront of our minds, we embrace our bootstrap core and aspire to be compatible with the world’s largest UI ecosystem. By depending exclusively on the Bootstrap stylesheet, React-Bootstrap works with the thousands of Bootstrap themes you already enjoy.

Semantic is a UI component architecture based on natural language ideas. The official Semantic-UI-React integration is Semantic UI React. It includes more than 50 components, is jQuery-free, and has Auto Controlled State, Sub Components, and other features. This package is recommended if your React App requires Semantic UI.

Semantic UI considers words and classes to be interchangeable ideas. Classes leverage natural language syntaxes such as noun/modifier connections, word order, and plurality to link ideas naturally. Furthermore, Semantic employs simple statements known as behaviors to activate functionality. Any arbitrary decision in a component is represented as a setting that developers may change.

Fluent is a cross-platform, open-source design system that provides UI/UX designers and developers with the tools they need to build compelling product experiences — accessibility, internationalization, and performance. Fluent design is utilized for devices, and tools, Windows 11, and Windows 10.

Fluent people listen and adapt. They seem natural on a variety of devices, from tablets to laptops, and PCs to televisions. They go from the office to the living room and then to virtual worlds. It also adapts to behavior and intent—they grasp and anticipate what is required. They bring people and ideas together, whether they are on opposite ends of the world or standing next to each other.

Material-UI, in a nutshell, is an open-source project that includes React components that apply Google’s Material Design. It began in 2014, just after React was released to the public, and has risen in popularity ever since.

It’s the most widely used React UI library. It is a simple and adaptable component framework for creating quicker, more attractive, and more accessible React apps. Material-UI has almost 100 components. It also includes over 1000 icons.

Chakra UI is a suite of accessible, reusable, and composable React components that make building web pages and apps a breeze. Chakra UI components adhere to the WAI-ARIA standards specifications and provide the appropriate aria-* properties. Because of its performance and experience, the Chakra UI community is rapidly expanding. In addition, Chakra UI comes with well-written documentation and code samples.

Chakra UI Pro includes more than 210 components with source code to help you construct your project quicker and more easily. Out of the box, all components support both a bright and a dark color mode. You may alter the components, your style, and your brand as needed. It’s as easy as that. It also includes responsive elements that look amazing on mobile, tablet, and desktop devices. Every code sample you’ll receive is written in TypeScript and is designed to work perfectly with Chakra UI. For a better development experience, components are logically segregated into many files. Finally, accessibility comes first. That is why they prioritize accessibility from the start.

This UI library is for you if you want your web app to feel natural. Onsen UI is intended to enhance the user experience by giving it a mobile-like feel. It’s loaded with features that mimic the UI of native iOS and Android devices. Onsen’s UI elements and components are natively created, making them ideal for developing hybrid and online apps. The package lets you emulate page transitions, animations, ripple effects, popup models, and other features found on native Android and iOS devices.

How Can These ReactJS Libraries Help Develop Faster Uis?

ReactJS has a strong community and many packages for various capabilities. The user interface (UI) is the most important aspect of any application. We may encounter various sophisticated UIs and flows with React projects.

We may need more time to create a component from scratch. For example, if our component has a form or table, we may choose a third-party library to shorten development time. However, this will need the use of several third-party packages in our software.

When our dependencies grow, we may have challenges, such as certain packages becoming deprecated or not being compatible with the current React version. This will prevent our app from being upgraded to a newer version. This is determined by the project.

To eliminate these kinds of difficulties and bundles, we may use a UI library. A UI library comprises the most widely used components and is maintained by a broader community. It is sufficient for the majority of React projects. This is how these ReactJS Libraries can help develop faster UIs.

Each of these above-mentioned techniques or methods has been realistically implemented by ReactJs developers and has proven to be successful in building ReactJS UIs faster.

Indeed, UI libraries shorten development time and minimize the number of dependencies used. There are a few more UI libraries, but I’ve just selected the top seven most popular. I hope you found this helpful.