MySQL generated columns pose as a powerful, easy-to-use, and advanced tool for anyone who wants to add automatically generated data to their tables – in this blog, we will learn everything you need to know to master them.

Generated columns allow you to store automatically generated data in a table without using the INSERT and UPDATE clauses. This useful feature has been part of MySQL since version 5.7, and it represents an alternative approach to triggers when it comes to generating data. Also, generated columns can help you make your query easier and more efficient.

Let’s now learn everything you need to know to master generated columns in MySQL.

What Is a MySQL Generated Column?

You can also precede AS with the GENERATED ALWAYS keywords to make the generated nature of the column more explicit, but this is optional. Then, you can indicate whether the type of the generated column is VIRTUAL or STORED. You will learn the difference between the two types in the chapter below. By default, if not explicitly specified in the query, MySQL marks a generated column as VIRTUAL. 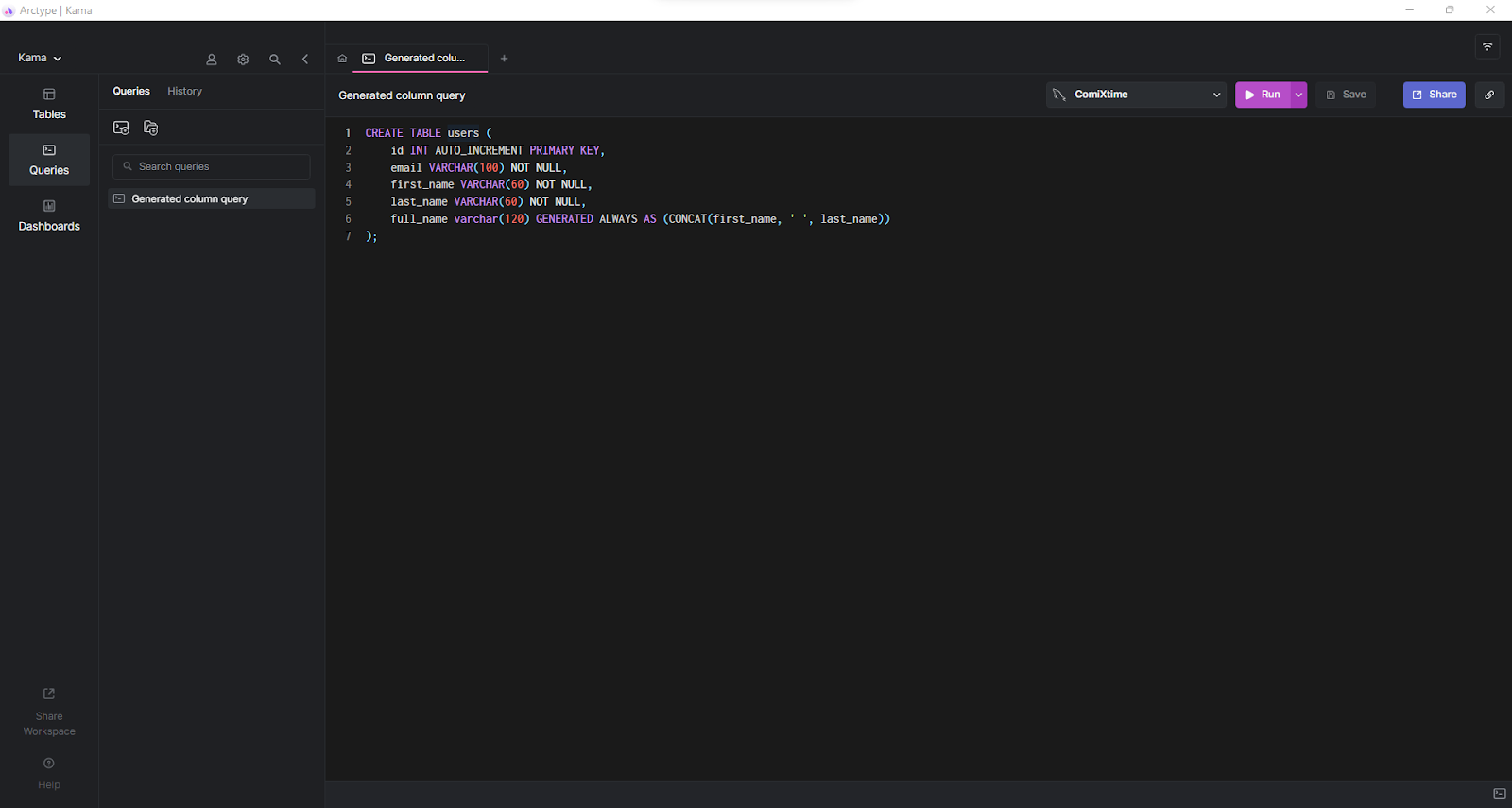 In this example, the full_name column will automatically store the concatenation of the first_name and last_name columns.

What Types of Generated Columns Exist in MySQL?

As explained earlier, you can define a generated column as VIRTUAL or STORED. Let’s now take a closer look at these two types.

MySQL does not store a generated column marked as VIRTUAL. This means that MySQL evaluates its value on the fly when required. This typically happens immediately after any BEFORE query is triggered. In other terms, a virtual generated column takes up no storage space.

MySQL stores any generated column marked as STORED. This means that MySQL takes care of evaluating its value and storing it on the disk every time you insert or update a row. In other terms, a stored column requires storage space as if it was a normal column.

Let’s now learn more about the pros and cons of virtual and stored generated columns.

There are several reasons to adopt generated columns, but the three below are the most important ones.

Let’s now see generated columns in action in some examples coming from my experience as a backend developer collaborating with data-driven startups.

Using a Generated Column to Concatenate Columns For Consistency Reasons

When developing the front end of your application, you may notice certain patterns in data representation. For example, in sports, players on a team are generally identified with the following format:

As you can see, you can easily generate this data field by aggregating the four columns with the following generated column:

In this case, a generated column empowers you to standardize the data field format directly at the database level. In addition, a stored generated column avoids the inevitable overhead of constructing this field every time you need it.

Typically, you use the IDs of your resources in the URL of your website or REST APIs to retrieve the data you need. But publicly exposing your IDs could pose a security problem. That is especially true when you find yourself using autoincremental IDs, which are easy to predict and make scraping or bot attacks easier.

To avoid this, you can think about hiding your original IDs through the use of automatically generated, random, more secure public IDs. You can achieve this with a virtual generated column by hashing your IDs as follows:

Notice that to avoid generating known hash values, you can concatenate your ID with a special keyword. Learn more about MySQL encryption and compression functions here.

When filtering data, there are columns that are more useful than others. Also, you often have to change the representation of the values stored in the columns to make filtering simpler or more intuitive. Instead of doing this in every filter query, you can define a helpful generated column storing the information you need to perform the filtering in the desired format.

For example, you could define a generated column to more easily find the players on a basketball team as follows:

Such a column would produce:

This contains data useful for filtering and with the player’s birthdate in the US format.

As explained previously, you can only use generated columns within a table. Also, they can only involve immutable functions, and MySQL generates their values in response to an INSERT or UPDATE query. On the other hand, a trigger is a stored program that MySQL automatically executes whenever an INSERT, UPDATE or DELETE event associated with a particular table occurs. In other terms, triggers can involve several tables and all MySQL functions. This makes them a more complete solution compared to generated columns. At the same time, MySQL triggers are inherently more complex to use and define and also slower than generated columns.

MySQL generated columns are undoubtedly a great tool that can serve many uses and bring several benefits. Adopting them is easy and effective, although not many database developers use them. Either way, knowing how to take advantage of them may become essential to making your backend application faster, cleaner, and less complex. I hope that by explaining the use cases of generated columns through real-world examples, I was able to help you gain more knowledge in the database world, and until next time.